I have reviewed several of V. Mark Covington's books on this site in the past, and today I am delighted to welcome him here for an interview. From his snappy answers to the questions presented below, you will see why I consider him one of today's leading humorists. I also encourage you to read the review of his books posted on this site. With that introduction, let's welcome Mark Covington.

1. When did you first realize you wanted to become a writer?

As far back as I can remember I’ve written stories, my parents were big believers in bed time stories and I had loads of children’s books and I would make up new endings or completely new stories for the characters in the books. But wanting to write as a sole means of financial support - that came much later. When I finished my first book, about ten years ago, I had an editor/friend from Penguin read it and he pronounced it publishable. That’s when I first realized that I had a shot at writing for a living. I’ve been working toward that goal ever since.

2. When did you write your first book and how old were you?

My first book was “Church of the Path of Least Resistance” this is the book I just mentioned that the Penguin editor liked. I started it in my late twenties and it took me ten years to finish it because I was working full time and I only took it out and played with it once a month or so. This is before I learned you could work full time and write full time, all you had to give up was a life.

3. How many books have you written? Which one is your favorite?

Four and counting. My books are: Church of the Path of Least Resistance (still unpublished) Bullfish, Heavenly Pleasure, Homemade Sin and 2012 Montezuma’s Revenge, and I’m halfway through Khamel Towing. And one play- Shakespeare in the Trailer Park. I guess my favorite is Bullfish, it’s the most creative but the worst edited because I used a friend as editor instead of a professional- never, never do that.

4. What is your work schedule like when you’re writing?

Well, first of all I’m only “not writing” when I’m sleeping. I always carry around a note pad and I’m constantly looking for things that are book-worthy. If I could make my perfect schedule I’d roll out of bed around 10, transcribe the notes I made the night before around 2:00 a.m. Head to the gym around noon for an hour. Then lunch, and writing until about 3:00, take a walk, maybe take the dogs to the park, then home and writing until 6:00 or 7:00.

But, as it is, I roll out of bed around 7:00, drive to the office downtown, work the day job doing technical reports and project management. I clandestinely take notes on whatever book I am writing at meetings, hit the gym, head home about 6:30, dinner and then write until I pass out.

5. What would you say is your interesting writing quirk?

I tend to get into “the zone” when I write, step into the story and become oblivious to everything else. I remember once I was writing a scene where a young boy sticks his hand into a basket full of rattlesnakes and at that second my phone, set on vibrate in my pocket went off, I jumped up and ran out of the room, thinking there was a rattlesnake in my pants. I can lose hours writing, I can set up my laptop on the front porch at ten in the morning and before I know it, it’s getting dark outside.

6. Where do you get your information or ideas for your books?

Everywhere. I was looking for a place to vacation once and found the Atlantis resort and thought, “wouldn’t it be interesting if this resort went back in time and was actually the original Atlantis,” and Bullfish was born. I drove through a little town in central Florida called Cassadaga, and it’s full of psychics, spiritualists and mystics from all different “metaphysical disciplines. I wondered if they had a voodoorine who made zombies, shortly afterward I was at a swimming pool in a retirement community and watched these folks floating around the pool on their ‘noodles’ moving slow with blank expressions, and thought, well here are the zombies - and Homemade Sin was born. And, of course2012 Montezuma’s Revenge came from the upcoming end of the world.

7. What do you like to do when you’re not writing?

I’m a beach person, love to scuba dive, love the Caribbean, and here in Richmond we are an hour and a half to the beach and an hour and a half to the mountains and I try to ski a couple of times a year. I’m a pretty good cook so I do all the cooking at our house; it’s one of the few things that take my mind off everything else. When you have four burners going and the oven it’s hard to think about anything else. We have two Aussie shepherds (the male is my sou chef and official food taster) so they need to be active and we take them hiking in the mountains.. We also go occasional polo matches or the frequent wine tasting.

8. What was one of the most surprising things you learned in creating your books?

I do a lot of research so I’m always learning something interesting. Writing Bullfish I learned a lot about Atlantis, the Marie Celeste, and genetic engineering. In Heavenly Pleasure I learned all about living vampires and ice cream. InHomemade Sin I learned all about voodoo, restaurant reviews and cats. In 2012 Montezuma’s Revenge I learned Mayan astronomy (from an old Mayan at the base of a Mayan pyramid in Cozumel), nanobot technology, Martian politics, and high tech surveillance. I also got to give Martian cities names like Bradbury and Asimov, which was fun.

9. What do you think makes a good story?

The story itself. Some readers like character driven books but for me it’s all about the story. Of course the characters have to be multi-dimensional and quirky, but I want an intricate story with more twists and turns than a roller coaster. I don’t think the first coherent sentence used by a caveman was about food, or sex or shelter, I think the first sentence primitive man uttered was “tell me a story.” 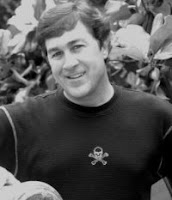 10. Where can readers find you Mark?

Sometimes at the bar at Café Guttenberg, or the bar at Can Can French Bistro, or the bar at the Conch Republic…(I think there’s a theme here).. I do hang out at bars but only to watch people and get ideas for character development, (that’s my story and I’m sticking to it). When I’m not at a bar you can find me at: