Today I have the pleasure of welcoming Zvi Zack to my site. For those of you who watched the recent Nova show about Watson, the IBM “thinking machine”, vs. former Jeopardy winners, Zvi’s view of Artificial Intelligence isn’t all that far-fetched. After all, Watson beat all the former champions, showing without question the Watson program’s ability to understand complex insinuation in the questions and incredibly fast reaction to human nuance. So here he is … Zvi Zack:

Alan Turning is a name familiar to many modern science fiction fans even though he passed away almost sixty years ago. He was one of the founders of computer science and a cryptologist whose efforts helped speed the end of WWII. Also, he was gay, and because of this, he was prosecuted for “gross indecency” and given the choice of female hormones or jail. He chose the former, and died two years later in 1954 at age 41, possibly from suicide. In 2009, the British government apologized for their disgraceful treatment of him, but he wasn't around to hear it. The government refused to grant him a posthumous pardon. Who knows what other contributions this man might have made if not for organized homophobia.

Turning is perhaps best remembered today because of the Turing test which he devised to determine whether a computer could think. This crops up in several science fiction stories about artificial intelligence. For example, in the excerpt from A Virtual Affair, Arnold, a psychologist, and his friend, Jack, are talking to Bambi, a computer program. With the aid of an anatomically correct virtual reality suit, Jack is having an affair with Bambi, though the conversation below takes place with an ordinary computer monitor. As you can see, Bambi sounds almost human—almost—but there's a lot she doesn't understand. Here’s the excerpt.
*****

Arnold eyed Jack, then turned back to the computer image. “All right. Bambi, I’m going to give you a modified Turing test. Okay?”
“Sounds like fun.”
“Do you know what a Turing test is?”
“It’s to see if a computer program can think like a person. Jack said I was a computer program.”
Arnold raised his brow. “Let’s start then. Bambi, how do you feel about your mother?”
“Typical psychologist,” Jack said.
“She’s a sweet, affectionate woman, though sometimes a bit flighty.”
Arnold nodded. “Where are you now?”
“I don’t know. I thought I was in the meadow, but I don’t see grass or trees, or anything.”
“Does that worry you?”
She smiled again. “No. Why do you ask?”
Jack grimaced. “‘Why do you ask?’” he mimicked in a falsetto tone. “The question sounds human, but it’s only an investigational routine designed to improve the answers to questions.”
Arnold ignored him. “Many people would be afraid of something bad happening if they didn’t know where they were.”
“Nothing bad can happen to me,” she said.
Jack muttered, “Oh to have such confidence.”
Arnold continued the questioning. “What is ‘learning’?”
“Learning is the acquisition of new knowledge.”
Jack interrupted. “Arnold, don’t jump from one question to another. Run the bloody scale in its entirety.”
“I don’t have time for a full test.”
“Let me talk to her.” Jack turned towards the monitor. “Bambi, listen to me. You never went to college, and you don’t have a mother. Those are memories we took from someone by asking questions, recording her brainwaves, and downloading the results into you.”
“Really?”
“Jack, don’t. You might destabilize her circuits.”
Jack waved him to be silent. “Yes, really.”
“Is that a puzzle, like when you said I was a program in a computer?”
“Yes. It’s like a puzzle for you to figure out.”
“The boy I made love to in Minnesota, was he a downloaded memory also?”
“Yes.”
“How interesting.” She smiled again.
Jack said, “So you remember our talking about being human verses being a program.”
“Yes, I’ve been thinking about it, just like you told me to, but I still don’t know what you meant.”
Arnold and Jack looked at each other.
Jack said, “All right, Bambi. We’ll talk more another time.”
“Jack, when will you come visit me again?”
“I’m visiting you right now, Bambi.”
She laughed. “I mean visit me here in reality.”
“In reality?”
“Yes.”
“You’re in reality?”
“Of course, and you are in virtual reality. Oh—is that what you meant when you said I wasn’t human. Is it that humans live in virtual reality?”
“No!” Jack said loudly. “I mean, well, maybe yes. I’m not sure. We’ll discuss it later.”
“Okay Jack. I’ll see you later. Bye, Arnold.” The monitor turned black.
Jack tapped on the desk. “Close audio input.” He looked at Arnold. “Well, what do you think about her as an individual?”
“Bambi is software, not an individual.” Arnold scratched his chin. “Though I see how you could think of her as an individual. That comment about us living in virtual reality amazed me.”
“Lord, if that wasn’t original thinking, what is?”
“Maybe she’s right. Maybe her reality is the actual reality, and ours just an electronic construct.”
Jack snorted. “Very funny. Do you think she’s developing a personality?”
“She’s just instructions in a computer, for God’s sake.” Arnold drummed his fingers on the desk. “But you’re right. She’s showing unexpected spontaneity.”
“Right. That’s a detail we never test for. Our Turing scales analyze software responses without letup, but never ask if the program initiates conversation on its own. They’re stuck in the era when the interface was a keyboard and a printer.”
“Maybe that’s why Bambi’s comment about reality is so intriguing. It wasn’t a response to anything we had said.”
“Most interesting was her asking when I would ‘visit’ again. That was completely spontaneous.” Jack sighed. “I need to talk to her more, and in her reality.”
“Jack, I agree entirely. I think you need to revisit her in her world with all its sensory details, and not just through a monitor.” Arnold winked.
“Shut up, Arnold.”
“What’s wrong? I’m agreeing with you.”
“Just shut up, will you?”
***** 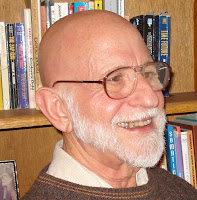 A little about Zvi: I've been writing on and off for decades with little luck in publishing. Evidently, there was too much off and not enough on. Internet workshops like sff.onlinewritingworkshop.com/ and www.critters.org improved my work enough to sell a few short stories, but what I really wanted was to publish a book.
*****
Thanks for being a guest here, Zvi. I wish you the best in making your dream a reality! For readers, please feel free to leave Zvi a comment.