The Family Truth behind "The Shadow Lord" 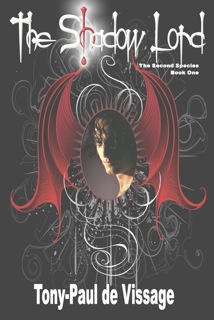 Vampires based in Fact

It was a lovely Southern summer afternoon—late afternoon, in fact.  What the townspeople called “evening,” that time before day turns into night and the sun begins to dim.  It was around six o’clock when Warene de Vissage stepped from the dining room of the house onto the back porch, calling to her child to come in for dinner.  The sinking sun was shining on the back side of the house and Warene was sheltered from its rays by four walls and a roof.  Nevertheless, she could see the heat rising in shimmering waves  from the sidewalk fifteen  feet away behind the barrier of a running rose-covered picket fence.  She could also feel that same heat touching her skin and surrounding her like a prickling aura.

Wrapping her arms protectively across her chest, she hurried back inside not waiting for the child to obey.

The next morning, Warene awoke in agony.  Her skin burned, felt hot and tight.  Staggering out of bed and to the mirror above her vanity, she stared at the horrorific image before her…its skin crimson and scorched, blistered and scaling, the burst edges of blisters curled and inflamed.  As if someone had held her over an open fire.  To touch her face brought excruciating pain.  To look at it brought tears.  It itched, it burned, and the awful part was…she knew why.

The sun…reflecting off the pavement.

Hadn’t she felt its heat?  She’d dared step outside during daylight, thinking just this once, it wouldn’t matter…just this once, so late in the day, she wouldn’t suffer, but though she hurried back inside, that damnable sun still found her, and did its work.

It would be weeks before she would heal.

This may sound like the beginning of a vampire story, but it’s true, taken from my own mother’s life.  Maman suffered from PMLE.  Polymorphic light eruption is one of the less virulent forms of XP, xeroderma pigmentosum…a condition in which an individual’s DNA cannot repair the damage done to the skin by ultraviolet  rays.  There is also the danger of cancer ( 2,000 times stronger than for an unaffected individual) or progressive neurological damage.

Not much was known about it back in Maman’s day and she was given no treatment,  except the usual and customary treatment prescripts for an “allergy,” which did absolutely nothing in the way of alleviating her pain, and definitely didn’t provide a cure.   One doctor actually suggested ultraviolet treatments, and the result of that…you can imagine.

Although they now say that PMLE generally resolves itself by age 30, there’s no cure for XP. XP suffers never come out in daylight; they live their entire lives after dark.  Maman, however, refused to do that.  Probably because she had no true knowledge of what she was suffering from, and because she had a family to take care of, she simply forged ahead with her life.  She was  never  able to go into the sunlight without being completely covered from head-to-toe, even on the most overcast days.  Long pants, knee socks, a long-sleeved shirt, gloves,  a neck scarf, and a wide-brimmed hat were her usual attire when leaving the house, plus the addition of an umbrella…and still, she could be touched by sunlight reflecting from the pavement or any surface, and going through her clothes to cause first degree burns.

PMLE/XP appears to be hereditary,  though the occurrence is one in a million, so I was lucky; even with my blond hair and fair skin, I can walk in sunlight with no more than the normal fear of getting a sunburn.  SPF-70 sunblock and I are old friends, however, and I use it faithfully.  My mother’s skin, where it wasn’t scarred by old, healed burns (mostly on her arms), was as pale and translucent as a piece of alabaster.

In hindsight, I imagine this condition also contributed to her death of ALS, Amyotrophic lateral sclerosis, a disease of the nerve cells in the brain and spinal cord that control voluntary muscle movement.

Okay, you’re probably saying about now.  This is all very interesting, and you have our sympathy, Tony-Paul, but… What does this have to do with vampires? I want to hear about your latest novel,  not your familial illnesses.

The inference is obvious, and may be one of the ways the vampire myth began.  If you were a superstititious person living in a primitive time when it was believed the sun sank into the sea every night and rose from it every morning, and you saw someone actually burned by that same sun…someone who was only comfortable after dark and only felt he could safely come out of his dwelling in nighttime…what would you think?  Other opinions have been offered:  premature burials, porphyria, lycanthropy.  I’m certain all these—plus PMLE and XP—attributed to the legend a good many of us who are writers have used to our advantage.

When I began my series The Second Species, I wanted my vampires to be different, not the usual Undead, sleeping-in-a-coffin type.  So I made them a living people, a second species of Mankind, divorced from their human brothers because of their differences.  They have many characteristics of the Undead but I’ve given them  acceptable  reasons:  the entire group suffers from XP, therefore they can’t emerge into sunlight.  I explained away other vampiric characteristics.  They have allergies—the most powerful one being to garlic and certain herbs.  Their refusal to look at crosses, etc., is not because they are repulsed by them but because their own religion demands they not look on the sacred objects of other faiths, and so on.  They have certain Laws, Canon handed down from their gods, to govern their behavior,  especially in regard to humans.  Understanding how normal people fear them, they have hidden themselves away in the cloud-covered peaks of the Carpathians where the sun never penetrates and whenever they emerge, tragedy inevitably follows.

That is the story behind the creation of my “vampires,” based in fact, elaborated in fiction.  The first novel in the series, The Shadow Lord, will in the early months of 2013 by Double Dragon Publishing.  Look for it…I think you’ll enjoy it…and feel a little sympathy for those true suffers who are “deprived of God’s holy sunlight.”
Posted by James L. Hatch at 12:01 AM