Secrets of the Subplot

James Hatch, I thank you for hosting me on the website with my favorite name in cyberspace. I’ve got a few literary thoughts to offer as well as info on my new novel, The Maxwell Vendetta, and I hope your readers will enjoy the thoughts and, of course, buy the books. Yes, books, plural. The Second Vendetta is the sequel to The Maxwell Vendetta and they’ll make a great pair for your library. Anyhow, here we go:

Secrets of the Subplot

There’s lots of ink devoted to plot technique, but relatively little to the subplot. It also seems to me that contemporary writers pay scant attention to this opportunity not only to spice up the action, but to add dimension and depth to their work.

The still-reigning subplot king is the bard of Avon. From the Toby Belch-Maria-Aguecheek-Malvolio action in Twelfth Night to the Laertes-Ophelia-Polonius family dynamics in Hamlet, Shakespeare knows how to keep us so involved in the secondary action that we sometimes forget what’s happening with the main characters. But never for long. In the end, he always brings the two streams of action together in a way that not only complements but enlarges and influences primary plot and character. In Twelfth Night, the humiliation of the Puritan Malvolio serves as a warning to those who would overreach and pervert the course of true romance such as that of Duke Orsino-Viola and Sebastian-Olivia. In Hamlet, of course, Laertes becomes the instrument by which Hamlet not only accomplishes his goal of avenging his father’s death, but fashions his own demise as well.

A more modern example is F. Scoot Fitzgerald’s use of Nick Carraway as the narrator of the title character’s rise and fall in The Great Gatsby. So skillful is Nick’s storytelling that it’s easy to forget that he’s romanticizing the image of a narcissistic gangster with a perverted idea of love. In that sense, the book is as much about Nick as about Gatsby. However, Gatsby carries the story, and important as he is, Nick’s part in the action is a subplot, an essential element without which the story would not have happened as it did, but is nevertheless background. Gatsby & Daisy are the characters we remember. Nick brings them together, and Nick helps Gatsby cover his and Daisy’s hit and run. But Fitzgerald is not satisfied with only one subplot. It’s a character from a second—George, the husband of the hit-run victim—from killing Gatsby and bringing the whole edifice tumbling down. We, the readers, view Gatsby’s death, then, not so much as martyrdom, as Nick does, but as rough justice. The point here being that 1) Without the subplot(s) the main plot could not survive; 2) without the subplots the view of Gatsby as a victim of his romantic yearnings would remain untarnished.

Different though they are, the common thread running through all these works is that the subplot operates parallel to the main action, but merges with and becomes vital to the finish. Furthermore, the subplots add color and dimension to the ideas and themes which would be impossible without them.

I offer here an illustration from my own work, not because I count myself in the ethereal realms of these masters, but because I believe it’s important to study and learn from them. Plus, of course, I want to plug my book.

In my recently released historical thriller, The Maxwell Vendetta, Andy Maxwell sets out to quash a vendetta that threatens to wipe out his prominent family and destroy their Sierra Nevada Ranch. The inciting incident is the murder of his younger brother on a San Francisco sidewalk in the summer of 1908. Along the way, Andy runs into a Chinese underworld lord named Charley Hung, to whom said brother owed a considerable sum, which Hung wants to collect from Andy. Andy goes through some harrowing adventures to escape Charley and his henchmen early in the book, then proceeds to his main mission of defeating the main agent of the vendetta, one Michael Yellow Squirrel. Near the end of the book, just when it appears Andy is about to accomplish his goal, Charley’s minions show up again at a most unexpected time and place and put his entire scheme in jeopardy.

True to the principles I’ve outlined above, these subplot characters become essential to the book’s finale, and (I hope) help add some texture to this novel that is more than an action-adventure-romance tale, but one with some telling insights into such matters as racism and political corruption as they manifest not only at the turn of the last century, but even today. 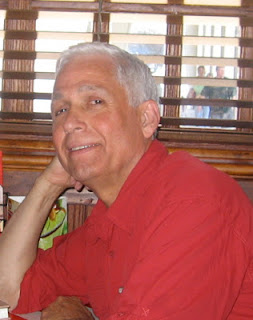 Carl Brush has been writing since he could write, which is quite a long time now. He grew up and lives in Northern California, close to the roots of the people and action of his historical thrillers, the recently-released The Maxwell Vendetta, and its sequel, The Second Vendetta. A third volume of the trilogy, set in pre-gold-rush San Francisco is nearing completion. Its working title: Bonita.

You can find Carl living with his wife in Oakland, California, where he enjoys the blessings of nearby children and grandchildren.

Journals in which his work has appeared include The Summerset Review, Right Hand Pointing, Blazevox, Storyglossia, Feathertale, and The Kiss Machine.  He has participated in the Napa Valley Writers’ Conference, the Squaw Valley Community of Writers, the Sewanee Writers’ Conference, and the Tin House Writers’ Workshop.
Posted by James L. Hatch at 12:01 AM