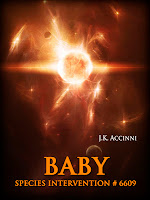 This week I had the pleasure of reading Baby, Species Intervention #6609, a novel by J.K. Accinni (edited/published by Skinny Leopard Media). As fate would have it, only last week I blogged about the reasons I read/write Sci-Fi at the Sweet N Sexy Divas blogspot, and it is against that blog I rate Baby as a solid five-star read. As stated in my blog, my criteria for outstanding Sci-Fi are imagination, technology, believability and some link to a fundamental force in the Universe larger than us. Baby brought all of those elements together, plus a compelling story that I couldn’t put down.


Baby tells the plight of a poor young woman, Netty, who escapes a brutal and violent marriage. Netty’s husband, twenty-two years her senior, is a corrupt judge during the time of prohibition (1929). As a lawyer years earlier, he discovered Netty inherited land and money she knows nothing about, and he married Netty to get her wealth. When he plans Netty’s death several years later, she escapes to a childhood hiding place. It is there she encounters a dying Oolahan, a creature who crash-landed on earth. That’s where the story gets incredibly interesting.

The Oolahan can heal living things, but not themselves. Netty nurses the creature back to life, and they establish a lifelong bond. Astonishingly, Netty’s dilapidated farm undergoes a metamorphosis that defies logic as the Oolahan gets stronger, and J.K. Accinni develops the relationship between the two so carefully the reader will fall in love with them both. Hard work brings some success to Netty, but she can scarcely keep up. She subsequently saves Wil, a younger man, from freezing to death, and the two become close as he pitches in to help with the chores. Wil eventually discovers “Baby,” the Oolahan, and the three of them blossom into a loving family.

There are, however, downsides. Both Wil and Netty are changed, physically and mentally, by Baby. Alas, Netty’s  husband  remains a mean-spirited brute with far reaching influence. When her husband re-discovers his wife, and realizes his claim to her inheritance could be challenged, he moves to have everyone associated with her eliminated. Murder after murder follows, and the story of love becomes one of heartache and horror.

But wait, there’s more. Netty, Baby and Wil have all changed … to the point they transcend death. And Baby has produced an offspring of his own. The retributions begin, and we find even the kindest creature imaginable is capable of vengeance.

Beyond a fantastic and imaginative storyline, there is also this: the book is extremely well-edited and the vocabulary is refreshing. J.K. Accinni is an articulate and masterful storyteller with a solid understanding of grammar. I loved reading this novel. You will too.
Posted by James L. Hatch at 4:59 AM