Did anyone hear about that little vampiric uprising that was held back in 1422 in Transylvania?  It made all the newspapers at the time, and the town criers were yelling about it from one street corner to the next. 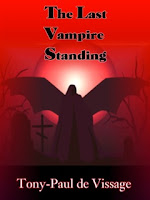 Seems Baslo Rigla, Domnitor (that’s leader, to you English-speakers) of the nosferatu had to put down a revolt by one of his fledglings. They met in Transylvania, in a little place called, appropriately enough, Vale lui Destrugere (Valley of Destruction) and believe me, it was. All the rebels were killed, except one, and he—the upstart who started the whole mess, one Vlad Chemare by name—suffered the most extreme punishment of all. While his followers were burned to ash by the morning sun rising over the valley, Vlad was buried alive in an unmarked grave.

Rigla laughed all the way back to his castel and a long time afterward, as he sipped from a good dark wine, vintage Romanian Nobility, 1399. Unfortunately for Rigla, he forgot that Vlad had a very faithful thrall who was determined to find his master no matter how long it took.

So, in 2012, when a certain Marius Racleta flew out of Aeroportul International Bucuresti Henri Coanda from Bucharest, Rigla had no idea what was going to happen.  Had he known, perhaps he wouldn’t have been so complacent, sitting there in the ballroom-converted-into-an-audience-chamber in the abandoned mansion in Savannah, Georgia.  For that plane carrying Marius also carried a coffin in its luggage hold, in which a certain still-rebellious but now very much older and wiser nosferatu rested, in his sleeping heart a desire for revenge a-simmering…until he reached the Land of the Free and the Home of the Prey and ran into very much Undead Valerie Swanson and her equally alive twin, Meredith, and got slightly sidetracked.  But not for long.

After all, a woman is just a woman, but revenge is a dish best served cold.  And 700 years can make for some mighty chilly morsels!

The Last Vampire standing will be available from Class Act Books on October 15.  www.classactbooks.com

My new novelette, Blood Will Freeze, is now available from Silver publishing, https://spsilverpublishing.com/product_book_info/new-release-c-1/products_id/1210/

EXCERPT: (Vlad is introduced by Valerie to her sister, Meredith)

“So you’re Valerie’s boyfriend?” as he nodded, I went on, “At least her tastes have improved.” I decided I’d better act like a hostess. “Can I get you anything? I’ve got coffee, some homemade wine, and milk.” I knew vampires could tolerate the first two. Milk I wasn’t so sure about.
“I never drink…milk,” he intoned solemnly but I swear those fantastic eyes were twinkling.
“Of course you don’t,” I murmured. And apparently you also watch vintage Universal horror movies. “So how about a glass of wine? Homemade,” I repeated, as if enticing him. “132-proof.” Actually I had no idea what proof it was or alcohol by volume, either. But I’d discovered that the guys I occasionally dated went for it if they thought it was particularly alcoholic.
He laughed, revealing the expected pointed incisors. “In that case, perhaps not. I doubt you’d want a tipsy vampire floating around in your living room, knocking things off tables with his wings.”
That conjured up a picture that made me laugh. So vamps can get drunk? On alcohol?  How about blood? That brought another, less comical picture. I shivered slightly and turned toward the fridge.
“Are you chilled?” It came out so solicitously.
“No. Why do you ask?”
“You were trembling.”
“Don’t worry about it.” As if he didn’t know.
“Perhaps I should. If I was the cause.”
So he did know. That conceited smile said a lot. “You certainly have a lot of self-importance if you think you can make me tremble.”
“My dear Meredith.” His voice dropped to a whisper and he sidled closer. Slowly, not that quick-as-a-wink movement Valerie’s so fond of making because she knows I hate it. More a shifting. “I’d do more than that…” He brushed a stray strand of hair from my face, tucking it behind my ear. “…if you’d let me.”
“Back off, buddy.” Nevertheless, I was the one who moved away, untucking the hair as I did so. “There’ll be none of that.”
“Whyever not?” He gave me a wide, transparent, and totally ingenious stare but didn’t follow me.
“Duh! Because you’re my sister’s boyfriend.” Really. Did he have to ask?
“So?”
This guy was unbelievable. He sincerely looked as if he didn’t have a clue. “So I don’t poach on Valerie’s property.” Though she’d certainly done it to me enough. So why not turn the tables? The thought flashed through my mind. I shoved it back out before it could park itself and cause trouble because Vlad was definitely looking as if he were interested… Stop it right there, Meredith. You don’t do that kind of thing. That’s Valerie’s department.
“I’m no one’s property.” It was said so quietly that it sent another chill through me. I’d insulted him by referring to him that way. “I’m the one who does the possessing.” He cocked his head to one side, as if viewing something fascinating. Could he read my thoughts? Damn, I’d never thought to ask about that. Valerie had certainly never volunteered the information and I doubted if she could. You have to have a mind to read one. “And I’m wondering who claims you.”
Posted by James L. Hatch at 12:01 AM