Different Hearts, From Bondage to Freedom by E. B. Sullivan. Five-star review by James L. Hatch 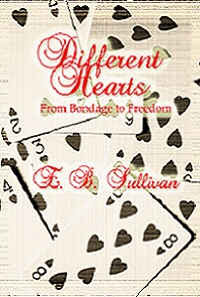 To be honest, Different Hearts is the first historical fiction novel I’ve had the pleasure of reviewing. I was initially drawn to the story when I read an excerpt posted on-line by Elizabeth Sullivan. Her editing was flawless, and her command of the language was far above the norm. I simply had to read more, so I emailed Elizabeth to ask if I could review her book. I’m glad I did.

The story begins in 1840 and covers the dark Civil War period of American history. The focus is on the events that befall the affluent Enraghty family in Newport, Rhode Island, and the offspring of a Miwok Indian slave girl named Hannah in California. On the East Coast, Sophia Enraghty is born an unwelcome arrival because she is not male. In California, Ezra is born of Hannah, who is owned by Jordan and Claudia Rawlings. As fate would have it, Claudia gives birth to a son on the same day Ezra is born. Because Hannah dies shortly after childbirth, Jordan brings Ezra into his home, and makes him the personal slave of his new son, Matthew.
From the outset, it is clear Elizabeth Sullivan did her homework. Her enthralling descriptions of the way of life for the two families transported my mind to a time where modern conveniences did not exist. Yet, despite the hardships that were part of life, especially for the Miwok slaves, the people themselves were not much different from those you might meet today.

Ezra and Matthew grow up together. Both are loved by Claudia Rawlings, almost as twins, but Jordon treats the two vastly different. Ezra is a slave; Matthew is Jordon’s son. A similar situation exists in the Enraghty family. Sophia’s elder sister receives all her mother’s attention, and her younger brother, Dylan, is raised by his father. Just as Ezra learns everything in parallel with Matthew, Sophia learns everything in parallel with Dylan. The Civil War soon impacts both families. To avoid disgrace, Sophia travels to California where she meets Ezra, who has grown to be an honorable man among men. Despite societal taboos, the two develop feelings for each other.

I won’t provide more details of the story; I don’t want to spoil it. What I will say is that Elizabeth Sullivan brings the reader into the lives of each of her characters with such finesse and clarity that one can almost see the dust on the table in Sophia’s cabin, and smell the flowers in the field. The story is developed around real events of the day: the naval and land battles during the war, the gold rush, the freeing of the slaves and the hardships of the day. Reading the book is like living in that time.

There is also enlightenment. Freeing the slaves in southern states that seceded from the Union did not free the slaves elsewhere, and did not change the slave status of the Indians in California. As the story develops, both Ezra and Sophia must deal with their own enslavement, whether real or imposed by the values and attitudes of society (white women did NOT marry Indians, slaves or ex-slaves). The interplay of the townspeople with Ezra and Sophia is so captivating that, by the time I finished reading the story, it wasn’t clear to me whether the part of the title “From bondage to Freedom” applied to Ezra … or to Sophia.

Different Hearts, From Bondage to Freedom is a fantastic five-star read that will touch every heart. I enjoyed it from beginning to end. The novel is meticulously edited, carefully researched and extremely well-written. I whole-heartedly recommend it.
Posted by James L. Hatch at 6:07 AM