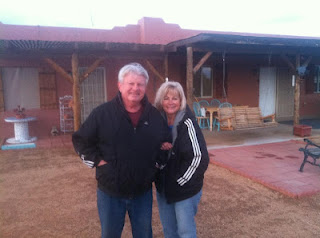 Plumbing, wiring, insulation, and framing the rooms would be our next step.  One weekend I came up and Jim had drawn lines on the cement floor showing where all the rooms, closets and appliances would be placed.  Let the arguments begin!  I tried to be reasonable, “This is not big enough, that cannot go there, and the size of this closet is a joke.  Compromises were made and redrawn lines and notes were final, until they needed to be changed again, and again!

I figured now was the time to call and find out about getting our electricity set up.  As the crow flies, our property lay 1.5 miles from the nearest point of electricity.  Imagine my surprise when the local utility company quotes a charge of over $85,000 to bring electricity to our property line.  Once I got myself up off the floor and my vision cleared, panic quickly set in.  Between feeling faint and blowing into a paper bag, I told my husband what I had learned.

“I kind of figured that would be the case,” he explained calmly.  “We are going to have to go with solar and wind generators.”  He continued to talk for several minutes, but I had quite listening.  What?  Solar?  Generators?  I needed to blow dry my hair!

Jim set up an “off the grid” electric system that produced enough energy to make me, I mean us, happy.  At this point, our system is complete with a 900-watt solar panel, a 2500-watt inverter, a load controller and two air-x, 400-watt windmills, enough for 24/7 power. Things were good when Big Bertha became a member of our family.  I love Big Bertha!  She is a Chinese diesel generator and she will run any and all of my everyday needs, such as blow dryers, curling irons, an evaporative cooler and a wall AC unit.  Have I mentioned I love her?

While Jim continued on the insides of the house I started on the horrific job of stuccoing.  I’m not sure how many weekends I poured stucco in a 5 gallon bucket, mixed it with water and then trawled it onto the blocks.  When I say stuccoing is one “sucky” job – it’s an understatement.  By the time I was done I had no fingernails and I had the hands of a 200-year-old lady!

Painting was next – which was a piece of cake compared to stucco!  When I finally washed out that brush for the last time it was a feeling of euphoria! What we had was a 1000 square foot rectangle with a kitchen, bathroom and great room.  We sat down and patted ourselves on our backs and enjoyed the moment!  I let Jim bask in his accomplishment for the night, which was the least I could do, then told him we had to start the bedroom!

The house finally ended up a 1600 sq ft home with one large bedroom/office and 2 bathrooms, laundry room, great room, and kitchen, but not with many, many – we’ll use the word discussions.  Compromises were made.  I got my doorless walk in shower and Jim gets to keep the stained cement floor.  I have my big laundry room, and again, Jim gets the stained floors!

We both retired in June of 2009 and are living here full time.  We have a 1500-gallon water tank that we fill about once a week.  We bought three chickens and I really enjoy watching them play.  We get an egg every day and I have learned there is a world of difference between grocery store eggs and eggs right out of the coop.  Though I have a black thumb, I have planted a garden and have actually grown carrots, cucumbers, tomatoes, broccoli, and spinach.  I have learned the hard way that any garden I expect to bear fruit must be built like Fort Knox.  Mice and rabbits are in abundance here and the packrats we have seen are the size of a small cat.  In the fall I am hoping to buy a couple pigs and maybe a cow or two.

There will be endless projects here and so many things to do and learn.  We have neighbors that will be life long friends.  There are miles of roads to be explored by quads or by car and I look forward to checking out every one.

Thanks for stopping by today.  If you would like to read parts 1 and 2, please visit www.pennyestelle.blogspot.com.

Seventh grader, Billy Cooper, is less that thrilled when Old Lady Wickware assigns a weekend assignment.  Each student must draw a name or event from a box and do an oral report on the drawn subject.  Billy has a full weekend and he has no time to be working on some legend dude named William Tell.  He figures he will just do a quick computer search and be able  to skate on this assignment.  All that changes when he meets his legend face to face in the fourteenth century!

Excerpt
Billy jumped up, took two steps backward and fell hard on his back from about four feet up, knocking the wind out of him. He was seeing blue sky and rolling green hills. An old, two-wheeled wagon was what he had fallen out of. The old man hurried over. “You alright, lad?”

Billy jumped to his feet before the old man could help him up. “Who…who….who are you? Where am I?” Billy stuttered, panic shooting through his body.

“Bring me where? Who said to bring me? Who? This is crazy! I’m not supposed to be here!” Billy’s voice got louder.

The man pulled out a satchel of coins, smiling. “Your mother paid me well to bring you to your aunt in Uri.”

“Uri?” Billy asked. “Dude, there’s no Uri in Arizona, I don’t think, and my aunt lives in Cottonwood.”

“Jonathan is my name, lad, not Dude.” The old man reached for Billy’s head. “Maybe when you fell you became…addled in your thinking.”

“I did not become…whatever. You’ve kidnapped me! I want to go home!”

http://www.amazon.com/Coopers-Awesome-Nightmare-Wickware-ebook/dp/B0088HTJ9U
Posted by James L. Hatch at 12:00 AM