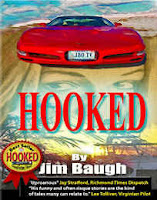 I rarely read autobiographies, but this one “hooked” me from the beginning, like getting insight into a life that might have been fun to live, even though it was punctuated with pain. I have to admit that I wondered whether the book was fiction, as claimed by Solstice Publishing at the beginning, or Jim Baugh’s actual autobiography. The author claims the stories are based on real-life events, so I assume the latter with a few embellishments. If that’s true, then Jim Baugh lived an interesting life from the time he was a boy until he reached middle-age. I have only known Jim Baugh through the Internet for a few years, but I hope the rest of his life is as full and eventually rewarding as fate left him at the conclusion of Hooked.

Jim’s idyllic childhood consisted of fishing and crabbing in the area around the York River Yacht Haven “A” dock. His experiences reminded me a lot of a modern adventure of Huck Finn. I could almost feel the warm sun on my face and smell the salt air as the boys swam and cooked up their catch while their fathers guzzled booze, grilled mammoth steaks and had a good time. Even the description of his encounter with the fifteen-year-old cougar who gave him his first kiss was endearing. The stories brought back memories of my own youth near Muckilteo, WA, catching crab, fishing and steaming rock cod wrapped in wet newspaper in an open fire pit. I also truly understood Jim’s comment about all the womanizing at the marina when he was young: “If it was not a boat, a crab, foosball table or a pizza, I was not that interested.”

A beautiful Magnolia tree graced the center of the marina where Jim’s fondest memories took root. That was where Sunday services were held, and those services became the source of faith and strength that Jim called on throughout his life. He would need it. The docks were an escape from his mother’s schizophrenia at home. Despite her bouts with demons, Jim’s mom was a renowned opera singer and the source of Jim’s musical talent. He began playing piano and organ at eight years old, and never stopped. About the same age, he also became interested in close-up magic tricks. Music and magic would see him through most of his life and, of course, the faith he came to know under the Magnolia tree.

His father divorced his mother, and later married “the bitch from hell.” As Jim puts it, his stepmother was an ugly beast, an unearthly demonic woman drug from a poisoned shallow grave. And that’s when his life changed for the worse. From that point on, Jim’s life moved further emotionally and farther in distance from “A” dock, the only life he really wanted. His story is one of struggle, disappointment and triumph as he married, raised two children and then divorced. His tales of mid-life dating are comical and sometimes vicariously exciting, but his trials eventually lead him to peace with himself and his situation.

I loved reading Hooked. It made me laugh out loud many times, and I found the straight-up presentation as fascinating as a long talk with my favorite bar tender in a cozy little tavern. The story line is definitely five-star. However, there is a down side to talking with your bar tender – grammar and editing can suffer. I had trouble with that because this story could have been sparkling clean. Therefore, overall, I rate this novel with 4.5 stars. English teachers and grammarians will grimace, but casual readers will relish the story and the characters. Hooked is darn fine read.
Posted by James L. Hatch at 6:59 PM