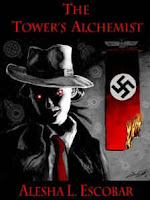 "The Tower's Alchemist" takes place in an alternate WWII era. I've included a food-related excerpt as well as an authentic wartime recipe for bread pudding! Here’s the excerpt:
-----

I still hopelessly tried to make an American dish every now and then but then I would only end up frustrated and yearning for home while my belly groaned. I decided to see what Jane was cooking and went downstairs to her flat on the first floor. I knocked a couple of times and she answered the door, wearing a dirty apron and wiping flour from her hands. Her freckled face broke into a smile and she welcomed me in.

“Please, have a seat, Isabella. I was just finishing the liver sandwiches.” She went back into her kitchen and pulled a dish out of the oven.

“Liver sandwiches?” I wanted to grimace but unless I was cooking for myself I had no right to object.

“Filled with liver?” As if I were supposed to overlook that fact.

“Not everyone in the world eats just loads of fried cows and cheese.”

“This is going to be interesting.”

“I’m trying to follow the ration recipes from Woman’s Weekly.” She gestured toward the magazine on her coffee table.

“Is it that bad?” I went over and grabbed the magazine and flipped through its pages. I took a few moments to scan its housekeeping articles and recipes.

“It’s starting to be. If you went to buy food more often, you’d know.” She arranged the liver sandwiches on two plates and invited me to come sit with her at the dining table.

“You’re cooking an awful lot lately.” I took a bite and gave silent thanks that she had at least seasoned the meat.

“Well I’m just honing my housekeeping skills, you know.” She bit into her sandwich and turned her left hand to reveal a diamond engagement ring on her finger. She must have slipped it on in the kitchen.

“Congratulations, Jane.” With a smile I got up and threw my arms around her. “I didn’t know...have I been away that long?”

“It was all so sudden, even I’m still surprised.” Her face simply glowed.

“Garret is a lucky man.” I frowned when she took it upon herself to plop another sliver of sandwich into my mouth. I wondered if she hid some stew or dumplings in the refrigerator and this was all to torture me.

Certain foods were luxuries during wartime, and many meals consisted of soups, vegetables, and … SPAM. Okay, stop making that face.

Below is a recipe for bread pudding—give it a try! This recipe (and others) can be found at The 1940's Experiment.

· 10 ounces of stale bread (you’ll have to use your kitchen scales!)

· 2 ounces of margarine or butter

Put bread into a basin and add a little water. Leave for 10 minutes.

Squeeze bread out until fairly dry

Add cinnamon a little at a time until your own taste

Place mixture into a greased pan (like a lasagna pan)

Sprinkle sugar on top 10 minutes before end of cooking

Allow to cool a little, slice and serve