The Writing of The Ice Bridge

Eight years ago my husband, Russell, and I were celebrating our twenty-fifth wedding anniversary and decided to return to quaint Mackinac Island in Michigan. We’d been there a few years before, but just for a quick afternoon stopover on our way home from visiting family in Wisconsin. We’d loved the Island for the few hours we’d been on it and promised ourselves we’d go there again someday. So when we began to plan for our anniversary vacation we traveled back for a longer stay of six days. I’d made reservations months ahead at the Iroquois Hotel on the water’s edge of Lake Huron and when the time came, after packing up everything we’d need, we jumped in the car and took off.

The Island doesn’t allow cars, only bicycles, horses and snowmobiles (in the winter) so we left our vehicle in a Mackinaw City parking lot on the mainland and boarded the ferry that would take us across the water to the Island, our luggage and two bicycles in tow. It was much cheaper to bring our own bikes instead of rent them there.

It was late August and the Island was beautiful. Crowded with colorful, fragrant flowers, clomping horses, whizzing bicycles and, of course, lots of tourists. Fudgies as they were called because they came, purchased and devoured so much of the little town’s fudge.

The Iroquois Hotel was lovely with its bright pastel colors and friendly service; a fancy in-house restaurant and our room with its wall of windows facing the lake. A lake that to me was as large as an ocean…because it went on forever.

Our six days there were heaven. We rode our bikes, peddling around the horses, carriages, and equine taxis, around the eight-mile in circumference island and enjoyed the sights. The friendly people. The breathtaking views of water, boats and woods. The fudge. We sped along West Bluff Road to the ritzy Grand Hotel (made famous in the 1980 romantic time travel movie Somewhere in Time with Jane Seymour and Christopher Reeve), ate the scrumptious and lavish tourists’ brunch there and afterwards, so full we could barely ride our bicycles, we gawked at the magnificent Victorian mansions with their elaborate gardens lining Lake Shore Drive.

We visited Fort Mackinac and listened amusedly to people talk about the ghost soldier some had reported seeing when twilight began to fall. My husband, a photography buff, even slipped out of our hotel room in the middle of one foggy night to get artsy pictures with our new digital camera of the fort, hoping to catch the ghost. He captured no ghost, but plenty of stunning photographs.

One night we even sat, spellbound, as a Lake Huron thunderstorm pounded wildly at our wall of windows. It was as if we were gazing at a tumultuous ocean.

Then one day someone, in a cubbyhole of a local hamburger joint, over our lunch, said something about the ice bridge, as the islanders called it. During the dead of winter, when the straits froze over, it was a narrow path that stretched about four miles across the ice that separated Mackinac Island from the St. Ignace mainland. The locals would drive in old Christmas trees along the path to show the way, to show it was now safe. To them the ice bridge meant freedom to come and go for up to two months a year without paying ferryboat or airplane fees. To me it sparked an idea for my next book…what if someone crossed the ice bridge one wintry night and fell through the ice? And disappeared…maybe even died?

I started asking questions of the locals: Had someone ever fallen through the ice and perished? Turns out over the years, that yes, some people actually had. Fallen in. When the ice wasn’t firm enough. Or when they’d gone off the solid marked path. Or in a snowstorm. Some on snowmobiles. Some were saved, dragged out, and some had not been. Hmmm.

That’s all it took for the book to begin forming in my head. The rest of the trip I looked at the Island with different eyes. A writer’s eyes. Writer’s ears. I filed away the memories and the home-grown stories recounted to me. Though most of my earlier books were romantic horror, I’d written a couple of straight contemporary murder mysteries, Scraps of Paper and All Things Slip Away, a few years before and Avalon Books had published them. I’d quite enjoyed writing them.

So I thought I’d write another one with Mackinac Island and its real and fictional ghost tales as the background. I’d show the beauty of the island, changing of the seasons, what it was like in summer, fall and winter (tons of snow and ice), and describe the historical landmarks. I’d spotlight the quirky close-knit inhabitants and have the protagonist gather their imaginary spirit stories to put into the ghost book she was writing. I’d make the Island nearly a main character itself with its enigmas, water, snow, ice and fog.

The novel would be about a woman, Charlotte, jilted in love, coming back to heal and visit her poignant childhood playground, and her lonely Aunt Bess. She’d meet an Island cop, Matt, and together they’d not only fall in love but would embark on a great dangerous adventure together. There’d be a spunky old lady, Hannah, living next door and the four would be great friends. Until the old lady disappears on a winter’s night while crossing the ice bridge and the mystery would begin. Had Hannah been murdered by someone….how exactly…by whom…and why? The remainder of the book would be the unraveling of that mystery as the central characters try to keep from being killed themselves by the devious murderer behind Hannah’s death. I’d embed the Island’s so-called ghost tales throughout the book to spice up the story even more. So it’d be a romantic ghostly murder mystery. Ah, ha. I couldn’t wait to begin.

When my husband and I returned home, refreshed and happy, I started it right away, with the memories of lovely Mackinac still fresh in my mind. Gosh, how I’d loved that Island. A tiny piece of old-fashioned paradise. The book came easily to me. And so The Ice Bridge was born. Now with a stunning new cover by Dawne Dominique and edited by my publisher, Kim Richards Gilchrist, it’s out in the world for everyone to read and, I hope, enjoy. 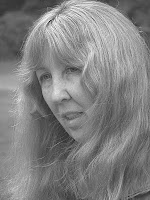 Since childhood I’ve always been an artist and worked as a graphic designer in the corporate world and for newspapers for twenty-three years before I quit to write full time. I began writing novels at 21 and have had fourteen (nine romantic horror, one historical romance, one romantic suspense, one romantic time travel and two murder mysteries) previous novels and eight short stories published from Zebra Books, Leisure Books, Avalon Books, The Wild Rose Press, Damnation Books and Eternal Press.

I’ve been married to Russell for thirty-three years; have a son, James, and two grandchildren, Joshua and Caitlyn, and I live in a small quaint town in Illinois called Columbia, which is right across the JB Bridge from St. Louis, Mo. We have two quirky cats, Sasha and Cleo, and the four of us live happily in an old house in the heart of town. Though I’ve been an artist, and a folk singer in my youth with my brother Jim, writing has always been my greatest passion, my butterfly stage, and I’ll probably write stories until the day I die.

BEFORE THE END: A Time of Demons (Damnation Books 2010)

The Woman in Crimson (Damnation Books 2010)

http://www.myspace.com/kathrynmeyergriffith (to see all my book trailers with original music by my singer/songwriter brother JS Meyer)

E-mail me at rdgriff@htc.net I love to hear from my readers.